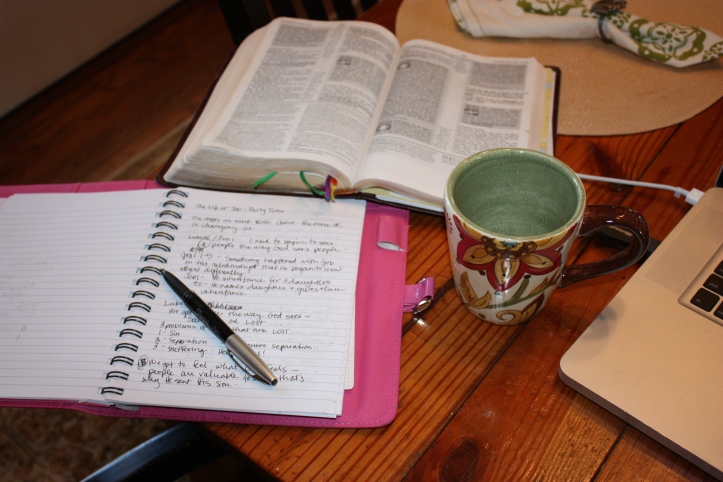 I need to invite you today to sit at my kitchen table.

There is nothing grand or even Holy about my kitchen table. It is just the place where I have recently been meeting with Jesus. So that makes it a Holy Place to me.

Three weeks ago, on January 2-5th, I plugged up my computer and grabbed my cup of coffee and sat here and watched online the Passion Conference 2012. {I realize not everyone can do that. I praise God that I could.} I praised God through worship as well as with the speakers that brought the Word of God to me at my table. I turned up the speakers as loud as they could go.

I fervently took notes to hold on to every word that was spoken by great and Godly men and women. These powerhouse speakers included Louie Giglio, John Piper, Beth Moore, Francis Chan and Christine Cain.

Their stories came alive and the Word of God leaped off the page as they made it real. They also sternly educated me that our world was still in Slavery. Human Slavery. 27 Million to be exact.

I wept tears of disgust and anguish over the many, many women, men and children that are in the middle of the epidemic that our culture has allowed to be ignored. It is a fact that there still is the trafficking of humans.

Many of the testimonies I heard were from those that were STUCK in the sex trafficking industry. Even though I was abruptly made aware of what is going on, I also received total motivation and was in absolute awe to see this generation do something about it. Watch this video to learn more!

I sat from my kitchen table and was transported to that Georgia Dome arena as the masses of 45,000 people from the ages of 18-25 gathered to make a difference in the world. They weren’t playing games in the least. They were there to do serious business with the God of the Universe. You can check out this link to see exactly what this group of kids did during these 3 days at the beginning of January. The numbers are staggering! You can click on the freedom videos to watch exactly what we saw and the messages that we were made aware of. You won’t want to miss that!

{I should have told you this was going to be a long coffee break with all the places I am sending you on the web!}

On the last day of the conference, CNN featured a story on the conference and what this generation was doing to make a difference for Christ.

Blew me out of the water.

Just kidding… it didn’t stop there!

The day after the conference they (those 45,000 college kids) TORE UP Twitter and the social media outlets talking about how we need to educate America about the horrific problems in Human trafficking all around the world. $3,350,000 was raised during that one week. (yes…that was 3 million dollars!)

You can see where they actually put there pocketbooks where their mouths were in DOING SOMETHING about this. It wasn’t just talk. I am telling you, I witnessed something incredible that spoke volumes to me about the generation right below me. They are not in this Christianity thing to play around. It’s serious! It was revival in my heart to see these kids stand up for what they believed in and take charge in BEING the change.

That alone was powerful! But as I sat there with all this information swirling around in my head. I began to cry out to God and say, “where can I be your ambassador?

I wept tears of hope as God answered my prayer for me and gave me a scripture to focus on and give me direction for the coming year.

Ephesians 6:18-20
Pray in the Spirit at all times and on every occasion. Stay alert and be persistent in your prayers for all believers everywhere.
And pray for me, too. Ask God to give me the right words so I can boldly explain God’s mysterious plan that the Good News is for Jews and Gentiles alike.
I am in chains now, still preaching this message as God’s ambassador. So pray that I will keep on speaking boldly for him, as I should.

Or as another version says…”Pray also for me, that whenever I speak, words may be given me so that I will fearlessly make known the mystery of the gospel, for which I am an ambassador.

I needed those words from God. Not mine, but His. Fearlessly too!

Making known the mystery of the gospel is day-to-day. Step by Step. Breath by Breath.

That is what I want to do here.

That is what I want to do with my family.

That is what I want to do with all that I come in contact with.

Dear Lord, I pray that you will make me into the Ambassador that you want me to be. Breathe your words into me as I radically share the Gospel of Jesus to whoever you want me to. What an absolute honor it is to be your ambassador! The blessings are ten-fold.

{Come back Tuesday, as I share Part 2 of my Kitchen Table Revival. It gets better! You know what they tell you about revival…you have to invite someone! So share with at least 2 people who you want to hear about how Jesus is moving powerfully in more places than my kitchen table.}

Ordinary but Extraordinary for Jesus